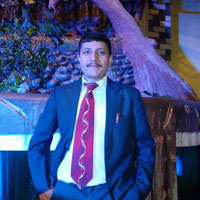 Mr. Adhikari Basu Dev has had continual struggling life so far. He was born in 1979, grown and brought up to youth-hood in country-side (Sunaula Bazar/ Neelkantha municipality) of Dhading district. Although, he has completed his schooling from country school, he later got the golden opportunity to study English (after completion of his high school) with a British citizen- Juliya Lattaway and got evolved in English Language, Literature as well as English Culture. He then graduated majoring with English and has been driving a language centre as an English Language Instructor as well as English language book writer in town (Kathmandu) since 2000. He has been able to produce few English Language Materials and develop many English language instructors in Nepal. There are several Language Centres in his initiation and representation even today in town. He happened to teach Nepali Language successfully to many foreign citizens such as; American, English/British, Austrian, Australian, Canadian, German/Dutch, Israeli, Japanese, Chinese or Irish, finish, Philippians, Korean and many others during their short or long stay in Nepal

His Post-graduation in English and involvement as Life Member in National Level Project “Nepalese Language Teachers’ and Trainers’ Association, NELTA” offered him tremendous steps onto international Conferences in order to discuss different levels’ and aspects’ issues of English language which led him in zenith of his profession catering innumerable successes in life. The ranges of encounter with international citizens, teaching- learning with them and close attachment with various foreigners aided his diversified profession – TOURISM. This empowered him in order for taking foreign people around the cities, plains, hills and mountains across naturally glowing Nepal. Now, he has diversely centralized his interest on his career along with regular profession in Tourism. He has been engaged in our organization as programme operator since its establishment in order to facilitate our valued tripping guests assisting them to make their visit and stay mesmerizing in Nepal.